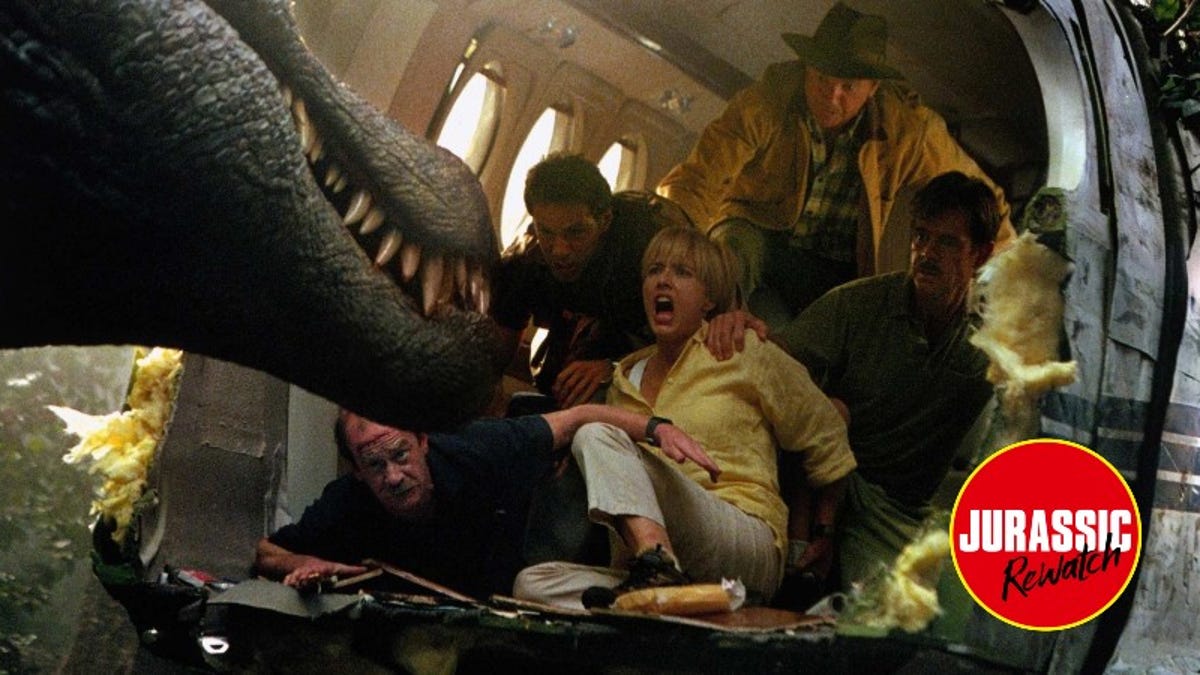 It’s been seven years since I last saw Jurassic Park III and wow, did I hate it at the time. I know that for a fact because I live-tweeted it and, as I was watching, I legitimately despised everything I saw. I was not looking forward to rewatching the film at all for Jurassic Rewatch—which is probably why I found myself enjoying it so damned much.

In the lead-up to the June 10 release of Jurassic World DominionI’ve been going through each film in the franchise with fresh eyes. First was Jurassic Park, followed by The Lost World, and now we’re here. Released in 2001 and directed by Joe Johnston, Jurassic Park III is a mostly forgotten film. The critical response was midling to average; it did well at the box office but was easily the lowest-grossing movie in the franchise (and remains so). In fact, after its release, interest in the franchise was so stagnant, it would take over a decade until Jurassic returned to the big screen again. All of which leads one to believe this film is fine but forgettable at best, bad but fun at worst.

Which, for the most part, is spot-on. Jurassic Park III is like a Jurassic Park movie on fast forward. In just the first 30 minutes of its already compact 92-minute runtime, you get cast reunions, John Williams’ classic musical themes, and new twists on dino-mythology. Before you know it, the characters are back on Site B being attacked by massive dinosaurs who then fight each other, too. Honestly, the film kicks off like a Jurassic Park greatest hits album and the story hasn’t even really developed yet.

That story centers on a young boy named Eric (Trevor Morgan) who goes parasailing with his stepdad near Site B but the boat is attacked and the pair go missing. Soon Eric’s divorced parents, played by William H. Macy and Téa Leoni, recruit Alan Grant (Sam Neill) to, he thinks, merely guide them on a flying tour over the island. But really they want to land on the dino-infested island and for him to guide them around to save their son.

A few things here. First of all, I had 1,000% forgotten that Laura Dern returns as Ellie Sattler in this movie. Wasn’t in my memory. So to see her and Grant bantering and geeking out about dinosaurs at the beginning just warmed my heart and instantly gave Jurassic Park III a leg up. (Which, let’s be honest, it already had since Sam Neill returns this time around.) On the other hand, a few scenes later Grant very specifically says nothing in the world could get him to go back to the island and then, in the very next scene, the promise of money does just that. It’s a huge betrayal of a beloved character and a major black mark on the movie. One that, the last time I watched it, I didn’t think I could get around.

And yes, I’ll address it: the one moment everyone remembers, or at least has been reminded of. The true legacy of Jurassic Park III—when Grant dreams that a velociraptor speaks to him and says “Alan!” It’s super goofy, more than a little out of place, and has become an easy target for humor on the internet. Watching the movie again, though, you realize the moment does in fact have a purpose. Very early on, Grant and his team reveal they’re working on a theory that raptors could communicate with each other; it’s a theory that he believes would have changed history and made raptors, not primates, the dominant species on the planet if not for their extinction. It’s a fascinating, albeit sort of silly, subplot, but it’s seeded throughout the entire movie leading to a big third act payoff. So after the fact, I can kind of forgive the one dumb, meme-worthy moment. It works much better in context.

There is one big plot hole that bugs me from the beginning, though. Once Grant finds out that Macy and Leoni’s characters lied to him about everything, he realizes they were never going to pay him… which suggests he didn’t cash the check they gave him before leaving for the island. Come on, Grant! How stupid can you be? Make sure the check clears!

Once that passes though, Jurassic Park III instantly gets exciting and stays there. We get big-ass dinosaurs attacking the humans and attacking each other, good storylines for beloved dinosaurs like the raptors, and plenty of new dinosaurs to fear like the pterodactyls. In comparison to the more measured second act of The Lost World, Jurassic Park III is like a rocket ship.

Jurassic Park III is also noteworthy because the plot is simple, relatable, and about something, in this case, parents finding a child. That then blossoms into a more emotional tale about a broken family dealing with a crisis. Whether that crisis is reconnecting over their missing son, or seeing what they loved in each other in the first place , Jurassic Park III is a story about the power of family. Heck, even the raptors have a storyline about family. Add that message to the movie’s strong point of view on the dinosaurs (they’re dangerous) with Grant in the middle of it all, keeping everything cohesive, and you begin to get a very familiar feeling. Hmm. What could it be? Oh yes, the first Jurassic Park. A simple story with human emotion that at first gets messed up, but then also sort of saved, by dinosaurs.

However—and that’s a big “however”—I don’t want to give Jurassic Park III too much credit. For starters, though it does have a lot of fun, innovative action scenes, they’re all very chaotic and hard to follow. Spielberg’s action scenes run rings around Johnston’s. The setup to get to the island is also so wildly misguided that it can be hard to overlook. And, ultimately, this film, like the previous one, is way more of a standalone movie than it is a sequel. Sure, both The Lost World and Jurassic Park III tell a new chapter in this story with the same characters, locations, dinosaurs, etc. But neither film answers any of your questions from the last film. For example, in this film, Grant mentions the events of San Diego, but that’s it. We don’t know if InGen got sued. We don’t know if the T-Rex got back. We don’t know if the baby T-Rex grew up. Truly the only link to the story of the last film is they share a location and that one passing mention. Which, now in retrospect, is similar to how The Lost World handled the original film, and is a big reason why these sequels are all so vastly inferior to the original.

Nevertheless, if you go in not expecting much, Jurassic Park III is super entertaining. The flaws are big and obvious but so are its emotions and fun factor. It knows what the audience wants from a Jurassic Park movie—innovative dinosaur action, moments of wow, John Williams’ score—and gives it to them over and over again. I can’t believe I’m going to say this. But I like Jurassic Park III.

Next up: the rebirth of the Jurassic franchise: 2015’s smash hit Jurassic World.

Jurassic Park Films, Ranked (Updating as I go through)