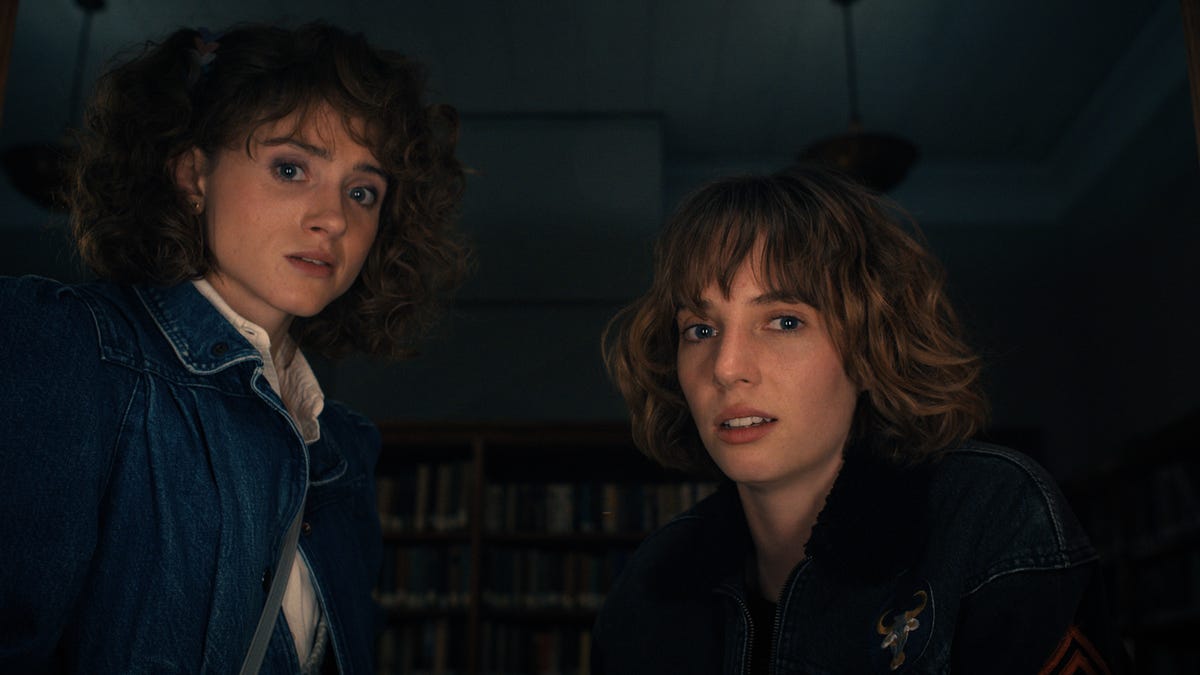 With Will and El out of Hawkins, the remaining hometown heroes find themselves at a crossroads when Stranger Things season four picks up with their lives. We see the younger crew go into high school and splinter apart as new friends show up, and also see unlikely pairings form when danger is afoot.

Ahead of season four’s arrival next week, io9 participated in a roundtable interview with cast members Joe Keery (Steve Harrington)Natalia Dyer (Nancy Wheeler)Maya Hawke (Robin Buckley)and Gaten Matarazzo (Dustin Henderson). The conversation focused on the strength of the show’s characters, something that Keery sees as an important reason why Stranger Things has been able to connect with such a large audience, even people who aren’t necessarily horror fans. “The (Duffer Brothers’) instincts with character and the fact that the show’s about, just the many shades of an outcast,” he said. “Pretty much everybody is an outcast in their own right. And the horror is just maybe the filter that the whole thing is going through.”

One surprising new pairing in season four is Robin and Nancy. “Tthese are two distinct characters, and it’s the beauty of the show and the way the brothers write—it’s that they they care about their characters,” Dyer said. “And we also care about the characters. They feel fully formed enough that you can see: how is this person with this person? And then add in this person to explore the dynamics. I think with Robin and Nancy these are two really different characters that, I don’t know, it always was inevitable. What is that like when those two [are] together? And it was really kind of fun and magical.”

Robin was a new character in season three—and became instant fan favorite—but we’ll get to know her even more in season four, something Hawke appreciates. “I think in watching season three, [it] definitely helped me understand who the character was in a different way because I got to see all the scenes cut together and be like, ‘Oh, this is the feeling that the person creates in me when I’m watching it.’ It’s like looking at yourself in the mirror. I sort of got to make different choices and kind of go further in certain directions,” she said. “In the fourth season, the four of us all really balance each other out in a really interesting, cool way. And like all of the different ways that we were all paired, we all have little moments together, and the characters are so clearly drawn that it makes it so fun to play.”

Last season, we saw Steve become closer with the younger characters (to the point that he was called “the babysitter”), but he also has an important friendship with Robin. Just don’t ask Keery to pick Steve’s favorite. “He’s maybe a little sacrificial in nature, puts other people before himself and wants to make sure everybody is safe. But you know, him and Robin are each other’s best advocates for looking for love out in the cold world. So I think there’s definitely elements of that as well,” Keery said. “[Picking a favorite will get] me in big trouble. I guess Steve is pretty close with Dustin.” That said, it sounds like we can look for a new contender for Steve’s BFF to rise this season: “There was really fun elements for us [referring to Joseph Quinn, who plays new character Eddie] to play.”

For his part, Matarazzo hints that Dustin will also form a key alliance with fellow Dungeons & Dragons fan Eddie after his core group of friends drifts apart. “It’s a pretty relatable situation I think. That’s always rough. But like usually you try to keep in touch. I mean—at the time in the ’80s it’s hard to. The separation, it’s upsetting. It’s going to be sad for for the group and it’s going to be sad for people to see,” he said. “Of course Dustin and Steve are incredibly close. But because Eddie goes to [the same] school and runs the Hellfire Club, [Dustin] grows close to him. I don’t know if there’s a bit of tug of war there.”

Watch the first drop of Stranger Things season four episodes on May 27, with a second batch concluding the season on July 1.