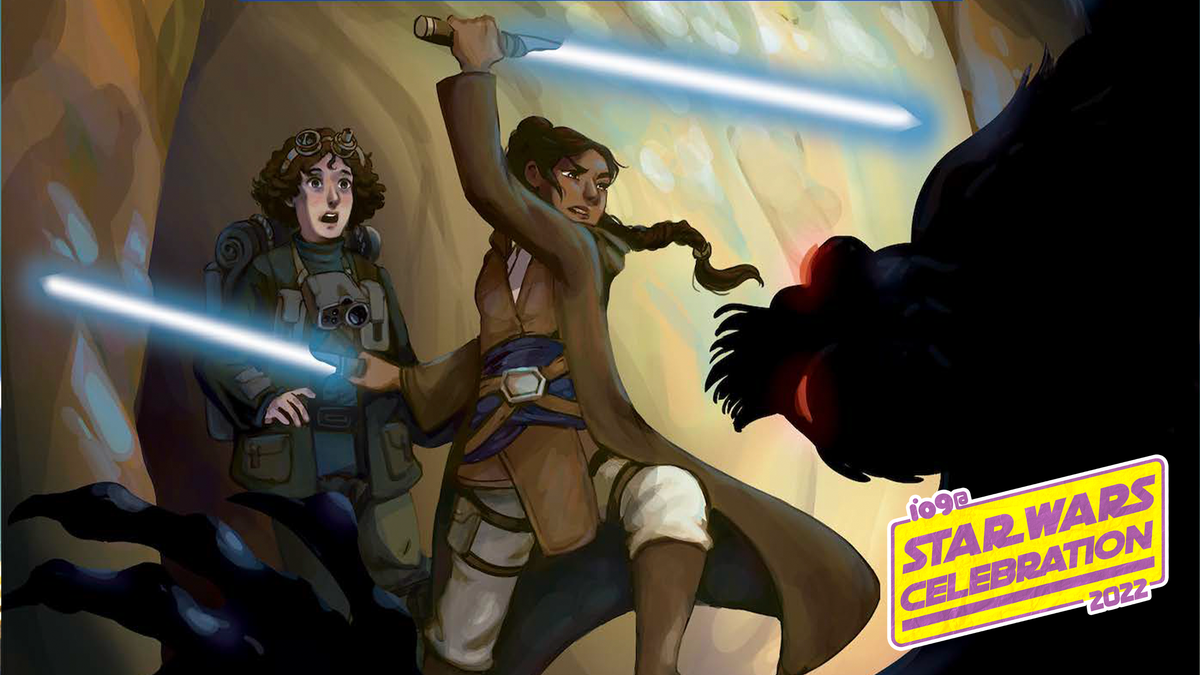 It’s surprising to look back and recall that in the time since the COVID-19 pandemic shut down large public gatherings and now, as events slowly but surely continue to re-enter social life, that a whole new era of Star Wars has come into being. The High Republic may have had to weather a storm as it arrived over the last few years, but now, at their first in-person panel together since “Project Luminous” was first announced, its architects can look back at what they have made together.

“It’s the moment at the end when the lights went up [at the end of our panel]. I don’t think I’d really come to terms with how many people were sitting in that room until then,” Cavan Scott, author of Marvel’s first High Republic comic and then the novel The Rising Stormrecently told io9 in the wake of the initiative’s panel at Star Wars Celebration Anaheim. “Which is a good thing… I freaked right out. It’s like the end of a party, when the lights go on. But it’s a good thing! Because it’s just like seeing the room packed, and yeah.. . that’s incredible.”

“When they threw up that blue logo for Phase II and everyone went, ‘Hwaa!’ And I don’t think any of us expected that, but that was so cool— and that, to me, lets you know that people are really excited for Phase II, and not for nothing,” Charles Soule, whose novel Light of the Jedi began the series in early 2021, added. “Because we’re all really used to it by now, we’ve been talking about it for a year plus or more… but Phase II, like, to go back in time like that? I feel like that is a really big deal, narratively. We took a risk with that, collectively. And it’s so cool to see it pay off, that people are still really excited even though we’re pulling them away from characters in the middle of a cliffhanger and giving them all these new characters and people are still ready for it. That’s so cool.”

“It’s one thing to see, or read people saying nice things about you on Twitter, but it’s an entirely different thing to see thousands of people in a room who took time out of their day—there’s a lot of other cool distractions here at Celebration —to sit here and listen to us talk about these books and comics we’ve all put together,” Daniel José Older added. “This world we’ve made. So, it was really, really… it drove home that we ‘ve done something special here.”

It wasn’t just the bigger philosophical picture for all the writers reckoning with the love of their work. Some of it simply involved seeing Star Wars fans really excited about a sentient rock. “For me,” Claudia Gray laughed, “it was seeing a Geode cosplayer!”

With the second phase of The High Republic—titled Quest of the Jedi—on the way to take readers even further back into the period centuries before the events of the Star Wars prequel trilogy, Celebration has been the first time the publishing initiative’s authors have been able to see first hand the warm reaction to their work in this new era of the galaxy far, far away. Check out io9’s full interview with the author team—Justina Ireland , alongside the aforementioned Scott, Soule, Older, and Gray—below.

James Whitbrook, io9: Justina, a lot of your work in High Republic so far has explored stories for YA audiences, and characters who are intended to share a similar, younger age with their target audience, like Vernestra. And what we know of Phas 2 so far focuses on young audiences and crucially young perspectives in the story similar to her. Why was it so important for you to open that window into this period of Star Wars?

Justina Ireland: Yeah, so for me, it really comes down to…no one really becomes a Star Wars fan when they’re, like, 40? A few people do, but most of us grow up as Star Wars fans. We all have those adult friends who are like, “Don’t you like Star Wars?” “I’m not into that.” *Gasp!* “My heart!” But it’s really important to realize the next generation of Star Wars fans are going to be the same. I’m one of those people who loved Jedi Academy in the 90’s, even though it was soapy and terrible…

Claudia Gray: That’s what I loved about it!

Ireland: Right, it’s not anything but what it is. And so I think it’s really important to have on ramps into the fandom for younger readers. Because, honestly, if my mom or dad was like, “But you love Star Wars!” I’ d be like, “Hell no.” Right? But we have had the benefit of coming up with it when it was still a younger thing, and now a lot of the fandom is older. Seasoned. So it’s really important to get younger readers . I remember when Clone Wars came out, because I’m also seasoned. And everyone was like, “It’s a kid’s cartoon! That’s not Star Wars.” I know we all rewrite history, but that’s how I felt when Clone Wars came out. Clone Wars was some of the best Star Wars storytelling you had in a very long time. And so I think, you have to give everyone a space within the fandom, otherwise what’s the point?

io9: Charles, switching tracks, your first work for Quest is the new Marvel Comic series The Bladeabout Jedi master Porter Engle. When you were ideating what you wanted to get out of Phase 2, what was it that drew you immediately telling this story?

Soule: I mean, Porter Engle is an old character, he’s three-hundred years old. Talk about seasoned. And so, I had a sense of who he was in Light of the Jedithat he had this past that really was very complicated for him. He thought of himself as really complicated. He had to do a lot of mental gymnastics to get himself to a place where he could smile and be happy and cook stew and be this jolly fellow we need. It wasn’t easy for him to go there, to get there…and I didn’t know what the reason was for that, but I always knew I wanted to know. And so, that was really when the opportunity came up to write something set 150 years earlier, it was like, “That is literally the story I want to tell in this time period.” And fortunately, I’m going to get to do it.

io9: Daniel, meanwhile a lot of your work in THReven as events got progressively darker, infused the setting with a lot of humor. Is that something you see yourself continuing with into Phase 2? Why was it so important for you?

Older: Well, to that point, that’s what we were doing to differentiate, to stake out this era as a different time from this era, that was definitely one of the ways we were doing it across the board. For myself, it’s sort of the Jedi creed of balance: Balance is so important, balance with the Force, and so on. Knowing where we were going with Phase I, I knew we needed to bake some stuff in the middle of it. There needed to be some light periods in the middle of the stuff that was happening. And that speaks to the storytelling, people were divided by it in a very deep way, and I wanted to give them something to, like…on the one hand, it was almost like a double -edged sword. Because it was like, “here’s this really light moment to give you a break from all the heavy stuff.” But on the other hand, it makes the heavy stuff heavier. Each one of those is hitting home how much Starlight Beacon is at home, and it made the tragedy even more tragic even as it was like, “Let’s have a good time and mess around in the kitchen.”

io9: Speaking to that tragedy, Claudia, you were the one who got to wreck everything down with the Fallen Star—it was very dramatic. But I wanted to ask, what has the challenge been for you to thread the needle through these different stories and formats, from your work on Phase 1 and now into Phase 2’s Quest of the Jedi comic?

Gray: When it came to the first two novels, obviously, it was like, “Can I get Geode in the book, naturally?” It was a shift. Several characters were the same from Into the Darkbut several were not. It was a little intimidating to come in and handle Elzar at this exact moment for the first time, and Stellan, particularly, this being his conclusion in the story. So, it was kind of a leap. I’d say the threading of the needle, that’s the whole story. It’s all part of the one big tapestry. I didn’t have to do that so much. It was done, because of the way we had all conceived of the story and brought it together— and thank goodness, because otherwise it would have been very, very difficult to bring those together.

Quest of the Jedi is, at least in this very early stage, still all in my head— it’s perfect, of course. Literature has never beheld this…and then you write the first page and you’re like, *Womp!* you know? “Why do they keep eating yogurt?! There’s so much yogurt on this page!” It’s something of a departure, both from the main narrative, but also tonally. I think it’s different from anything I’ve done before. I ‘m very excited to do it. I think that’s all I can say.

io9: Cavan, I wanted to ask you: a lot of the work you did in the Marvel comic, and then in Rising Stormyou got to see a lot of the personal crises Jedi face in this enlightened period to be seen as the embodiment of Good, no matter their struggles. Coming into Phase 2 and this more exploratory age for the Republic, what are the sorts of challenges we’ll see face these characters as individuals cut off from the structure of the Jedi and the Republic?

Scott: I think what you’ll see—and it’s done in a way round through my first phase material—is the relationships between the Jedi in particular [in Phase 2]. So, you get the father and daughter relationship between Sskeer and Keeve, I didn’t intend to write, but that’s exactly what it is. In Phase II, you get to see how the Jedi relate to other people…and that’s one thing we all talk about, the Jedi are out there. They’re not in their cloisters. They’re out there, with the people. With Phase II, that’s absolutely the world they find themselves in. They spend more time with people who aren’t Jedi than with people who are Jedi. And I think that’s what’s exciting about this Phase.

Star Wars: The High Republic‘s second phase, Quest of the Jedibegins this October.