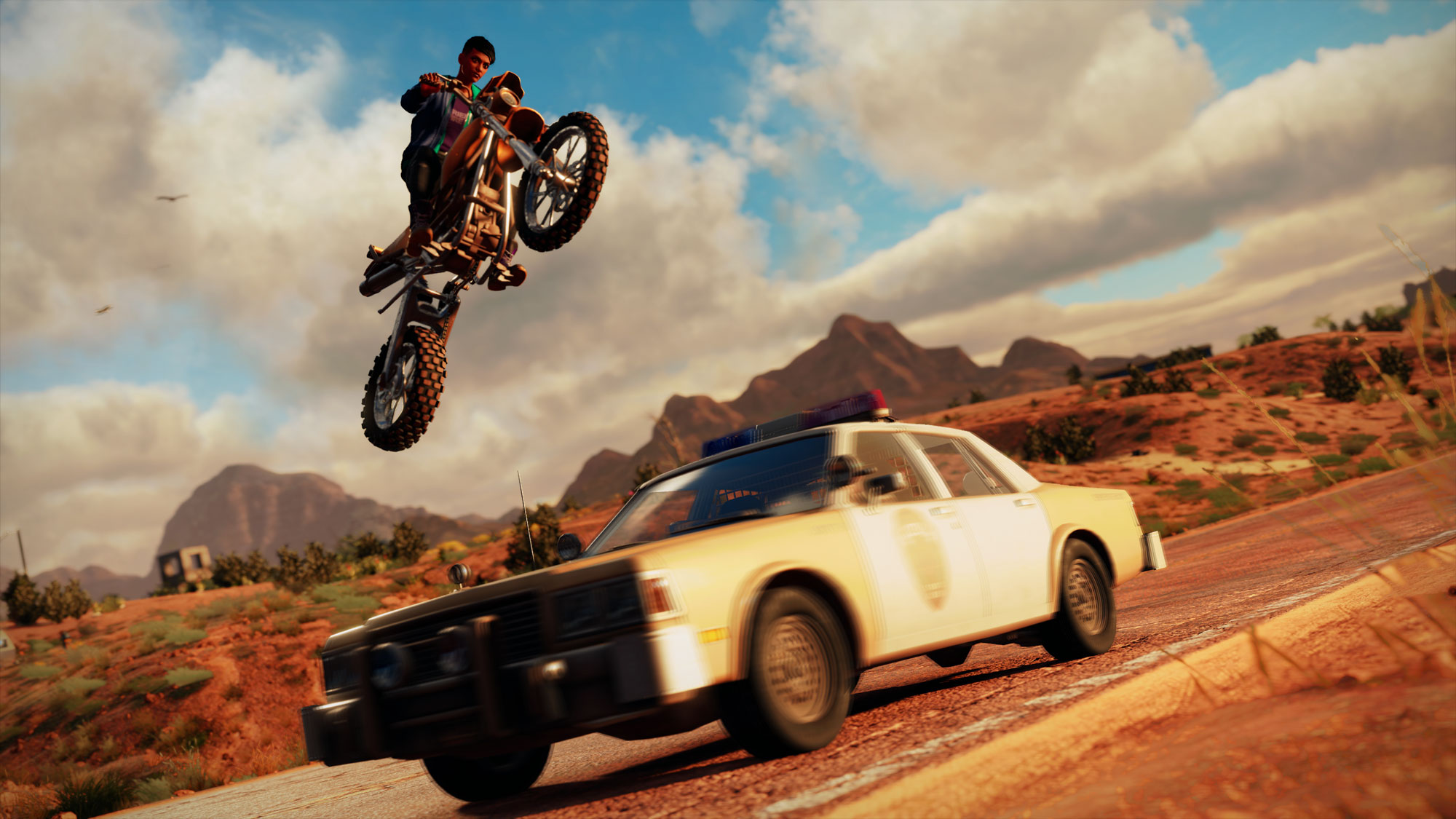 It was last August that Saints Row developer Volition . The new title was intended as a swerve away from the series’ trademark preposterousness and juvenalia. Now, , the team would like to clarify that just because it’s groundeddoesn’t mean it’s not going to be fun. Saints Row hasn’t suddenly become a po-faced exploration of organized crime, and it remains just as cartoonish as you may expect, it’s just a bit more grounded in its cartoonishness.

Last year, Chief Creative Officer Jim Boone and Lead Mission Designer Jeremy Bernstein said that the Saints Row series had burned out its narrative runway. After all, when your character has conquered the Earth, descended into Hell and fought a hair-rock opera duel with the Devil, street-level crime is going to feel like a big comedown. “I’ve been wanting to clarify that!” said Creative Director Brian Traficante, “I believe you can continue that runway […] but we didn’t want to.”

“In terms of going back to the grounded tone, it took some time,” said Traficante, as the team sought to analyze and define “what is Saints Row?” That series-defining formula seems to focus on meshing fun gameplay, silly jokes, cartoonish violence and a hefty dose of reference gags. “At times, it’s a gag for a gag’s sake, but there’s a consciousness of making sure that it’s exactly what we want to do, and it’s the right time to do it,” he said. There was a focus on ensuring that there’s plenty of light moments to balance out the times in the story when things go dark.

Writer Jennifer Campbell said that the team abides by “the rule of making sure that you’re punching up, not punching down.” Campbell added that “we’re exploring a more diverse group of characters so it gives us a lot more avenues to explore, anyway.” Traficante said that the developers created “internal mechanisms” to help ensure that a broad group of people could weigh in on some of the edgier gags in the game. He added that the team wanted to craft jokes that would enable “ everyone [to] be a part of the joke.”

Saints Row’s use of parody reached a fairly extreme level during the fourth game, where it ran a series of relationship-simulation sequences in the vein of Mass Effect. (Except, of course, the camera wasn’t cutting away as quickly when two characters decided to spend some alone time together.) These parodies are “definitely in the recipe,” said Traficante, but that they aren’t “front and center” in the new title, so players will need to hunt out the nods.

And players will spend a lot of time being encouraged to hunt through the world of Santo Ileso in pursuit of storytelling, gameplay and entertainment. The team has laced the city with randomly spawning discoverables, like a security fan loaded with cash, for you to find as you walk around. Traficante said that it takes testers around a week, playing full time, to work their way through the bulk of the title, which is vast and ever-growing.

As well as the breadth of the city, Volition also wanted to emphasize the depth of features like character customization. Users can expect a level of tweaking that looks to be beyond the level offered in, say, Cyberpunk 2077. You’ll be able to customize your appearance, voice and clothing, as well as the looks of your cars and weapons. And none of these features will be pay-to-use, mercifully, with everything instead unlocking the further into the game you progress.

Interestingly, the new title has a little less narrative freedom than some of its predecessors as a consequence of this richer, deeper world. This, says Jennifer Campbell, is to help imbue the game with a greater sense of purpose and meaning, bolstering the story. “We were really focused on keeping a causal chain, because you’re doing things in response to something,” she said. “You’re shooting at things because you did something earlier in the mission to elicit a response from an enemy faction,” she added, with the aim of putting “reason behind the things that we asked the player to do.” Players will feel that “their actions are affecting the game state.”

Having now seen around 45 minutes of gameplay footage, I can say that the new title focuses on a narrower definition of silly. You can melee an opponent, stick a grenade down their throat and then throw their body over to a group of enemies to blow them up. Or you can ask a friend in co-op play to pick up your car with a helicopter’s trailing electromagnet and drop you off at a mission location. There are piñata guns and footballs that stick to people hurling them up into the air, as well as a new wingsuit mechanic that enables you to bounce off a pedestrian to give yourself more flight time.

Certainly, the arrival of this Saints Row game feels like it’s going to be more of an event than it did previously. The enduring success of GTA Online‘s ever-present crime simulation sandbox has sucked so much air out of the genre that having a new alternative should be a big deal: We haven’t had a true “GTA-like” game since 2016’s Watch Dogs 2. The one risk is that Saints Row is looking to perfect a game that users have now moved on from.