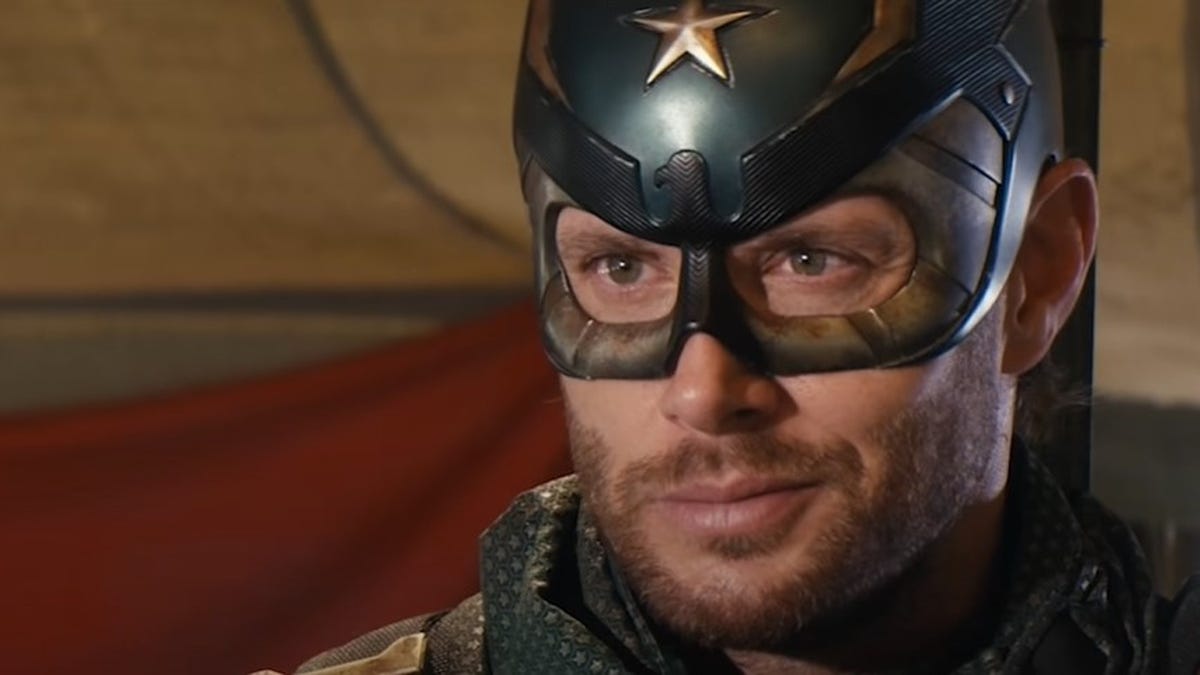 Since 2019, Prime Video’s superhero series The Boys—based on Garth Ennis and Darick Robertson’s comics published by Wildstorm and Dynamite—has been a bloody, anarchic romp that’s built up its own passionate fanbase and critical acclaim. Season three looks to be as bloody and absurd as ever, and adding to the chaos of it all is Supernatural alum Jensen Ackles as Soldier Boyaka “Captain America, but a dick.”

Ahead of the show’s return next week, series creator Eric Kripke and Ackles talked to Entertainment Weekly about reuniting and what’s to come with Soldier. Similar to Stormfront last season, he’s intended to be an antagonist whose appearance complicates things for the Boys and the superhero group The Seven. In the show’s universe, he was created by the Vought Corporation during WWII and billed as the world’s first superhero. As a result, according to Kripke, he’s “this walking, talking figure of macho American history. The figures that they’re using to create fear and panic and to manipulate and control the population are other Americans. “

The Boys has never been afraid to satirize and poke fun at America’s culture and government, and it sounds like it’ll be hitting even harder in this new season. Without stating it directly, Kripke admitted that “a really troubling development” in the country, likely last year’s attempted January 6 insurrection, was at the top of his mind when he and the writers were mapping out the season’s story. America’s government and right-wing media outlets have become successful in fostering growing sentiments of xenophobia and racism across the country in recent years, and that’s the perfect kind of storyline for the show to tackle. “They got very good at making you scared about these foreign ‘others’ who are coming to kill you,” Kripke acknowledged. “Now they’re saying the people that are coming to get you are your neighbor—the other political party… We’re trying to call attention to what bullshit that is.”

And the best way to do that will be through Soldier Boy, who Ackles calls “Captain America if he gave up superheroism and was just your drunk and inappropriate uncle.” For fans of the actor who’ve grown up watching him in Supernatural, it sounds like a hard departure from wisecracking, lovable Dean Winchester. Previous trailers have shown Soldier cracking heads, but it sounds like there’s some gnarly stuff on the way for a show that already isn’t afraid to get rather nasty. As Ackles recalled, there was one part of his character’s story that made him call Kripke and admit that he was uncomfortable with the script. “As a father of three, and a son and a husband and a self-respecting human being, I can’t do this ,” Ackles recalled. “I didn’t know where my line was, but you found it.” The scene has since been changed, but that alone should give you an idea of ​​what’s to come.

The Boys hits Prime Video with three episodes on June 3, followed by one episode per week.