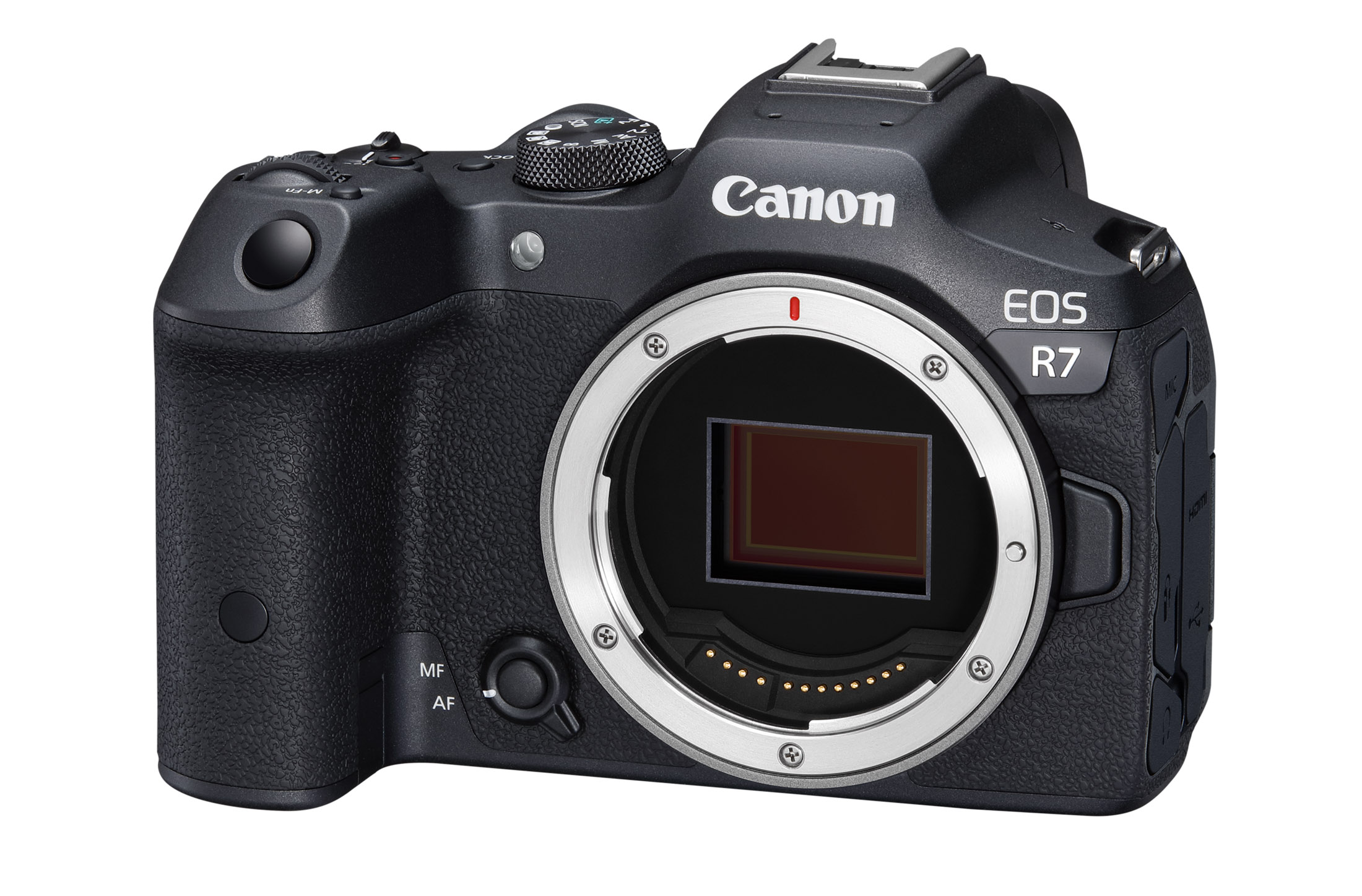 Canon has launched its first EOS R APS-C crop sensor cameras, the 32-megapixel EOS R7 and 24-megapixel EOS R10. The new models bring Canon’s APS-C and full-frame RF series in alignment, so you can finally use lenses interchangeably, much as you can with its EF and EF-S DSLR cameras. More importantly, they carry impressive specs like 15 fps mechanical shutter shooting speeds, 4K video at up to 60fps and Canon’s impressive Dual Pixel autofocus. Both are reasonably priced, as well.

The R7 is the higher-end option and has an all-new body with some design features we’ve not seen on any camera before. Rather than the typical two dials on top and one on back, it has just two. The second dial sits on back but at the top, wrapping around the focus point joystick. It looks like it could work, but Canon has had mixed success when messing with its camera layouts — the touch bar on the EOS R was not a popular feature, for instance .

It has a decent sized grip and weighs in at 612 grams (21.6 ounces), quite a bit more than Sony’s 503 gram A6600. Vloggers get a fully articulating 3-inch 1.62 million dot display and a 2.36-million dot OLED EVF, which is sub-par compared to the 3.69 million dot EVF on Fujifilm’s rival X-T4. The R7 offers 5-axis in-body stabilization rated up to 7 stops, the best in its category. Other key features include dual UHS-II card slots and both microphone and headphone ports. It uses the same LP-E6NH batteries as the R6 and R5, with Canon promising an excellent 660 shots per charge with the EVF enabled.

The R7 has a 32-megapixel sensor that’s neither stacked nor backside illuminated. However, it is new and not the same as found on other Canon APS-C cameras like the M6 ​​Mark II. Much like that model, it allows for some seriously fast shooting, with 30 fps in electronic shutter mode and a superb 15 fps in mechanical shutter mode — all with continuous autofocus and auto-exposure enabled. You can capture compressed RAW photos for about six seconds (100 shots) before the buffer fills in mechanical shutter mode, or 65 shots at 30 fps in electronic mode.

Autofocus is powered by Canon’s excellent Dual Pixel system for both photos and videos. Canon says it inherited the system from its flagship R3, including the new subject-, eye- and face-tracking features (it doesn’t have the eye-tracking Eye AF option, though). That means you should see AF ​​performance on par with what Sony offers and superior to Nikon and Fujifilm’s systems.

As for video, you can shoot 4K at up to 30p using the full 7K sensor area, which should allow for extremely sharp video, though recording time is limited to 30 minutes due to thermal limits. It can also handle sub-sampled (line- skipped) 4K at 60 fps, or do the same with a considerable 1.81x crop, with no overheating time issues. It can shoot 1080p at up to 120 fps.

You can shoot HDR PQ video if you want to create HDR content, or capture 10-bit footage in the C-Log 3 profile for extra editing and color correction flexibility. That feature, combined with the flip-out display, in-body stabilization and 4K modes, makes the R7 is one of the most capable APS-C cameras out there for video or vlogging.

The EOS R10 dials the feature set back a bit from the R7, but it’s still a very capable mirrorless camera. The biggest difference is in the resolution, with the R10 offering 24 megapixels rather than 32. It also lacks in-body stabilization, so you’ll need to rely on stabilized lenses for that. And while it has a flip-out display like the R7, the resolution is lower at 1.04 million dots (the 2.36 million dot OLED EVF is the same).

As with the R7, it can shoot continuous bursts at up to 15 fps with the mechanical shutter, or 23 fps in silent electronic mode. However, the buffer will fill quicker, allowing for only about 30 shots in mechanical mode or about 26 shots in silent mode.

The body design is different, with a more typical two-dial layout on top. It’s considerably smaller than the R7, weighing just 426 grams (15 ounces). The grip is slightly smaller, and there’s less space for your hand between the grip and lens.

On the video side, you’re not giving up too much. It can also shoot oversampled 4K video at 30fps using the full sensor width, or 4K 60p video with a 1.56x crop. It can capture 10-bit video in HDR PQ mode , but doesn’t offer any log settings. It comes with a microphone port, but no headphone jack.

By using the superior RF mount, the new cameras make Canon’s lineup less confusing and should help it better compete against APS-C models from Nikon and Sony. However, it begs the question of what it plans to do with its current EF-M APS -C mirrorless cameras. Given the more versatile and future-proof EOS R system, it’s hard to imagine that it’ll keep both around.

Canon launched its first RF-S lenses along with the new cameras, optimized for the smaller APS-C sensor sizes. They’re entry-level kit-style lenses that won’t exactly set the camera world on fire, but you can use RF full-frame lenses and even EF lenses with an adapter. The two new models are the $300 RF-S18-45mm f/4.5-6.3 IS STM and $480 RF-S18-150mm IS STM, with a 35mm field of view of 29 -72mm and 29-240mm, respectively. Both can be used on full-frame EOS R models, albeit with a 1.5x crop.