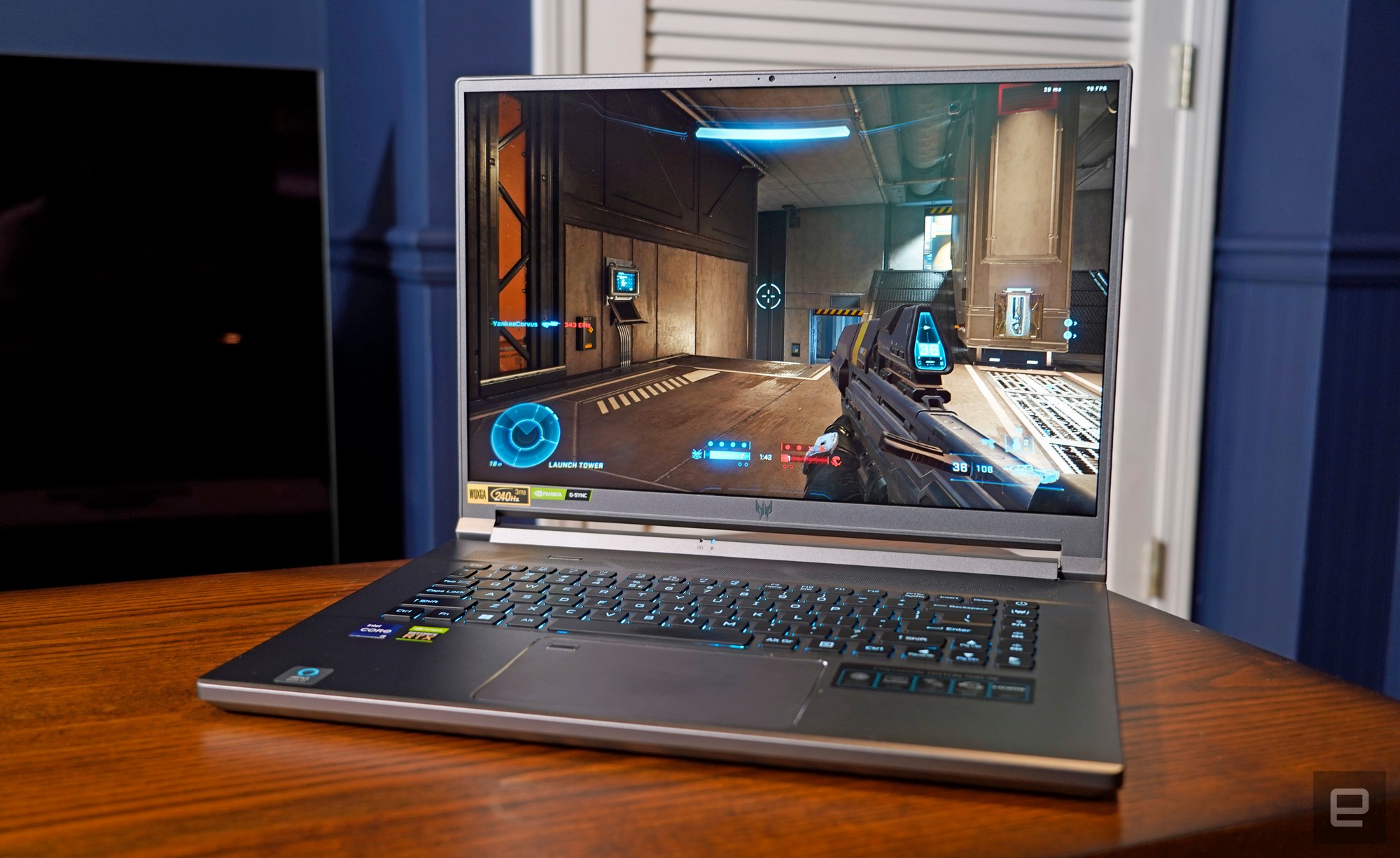 Acer is one of those laptop makers that frequently tries too hard to stand out. Consider the Predator Triton 900, a wild machine with a 360-degree swiveling screen that I found to be mostly useless. Earlier this month, Acer also announced plans to bring its SpatiaLabs glasses-free 3D technology to gaming laptops. Ambitious swings are nice and all, but these days I’m more interested in notebooks that are subtle about their gaming prowess. And after testing out the Predator Triton 500 SE for the past week, I’ve learned that Acer can pull that off pretty well.

The Triton 500 SE packs all of the power you’d want from a large gaming notebook, in a sleek metallic frame that wouldn’t look out of place in a stuffy office or lecture hall. There’s little need for garish LEDs (except for the keyboard backlight, which you can always turn off), or other obnoxious case bling. It’s ready to get down to work. And sure, it’s not the only subtle gaming notebook around, but competitors like the Razer Blade cost more than the Triton’s $2,300 starting price.

What separates the Triton 500 SE from your typical productivity laptop, aside from the powerful hardware, is its glorious 16-inch screen. It has a 16:10 aspect ratio, making it slightly taller than typical widescreen displays and more useful for dealing with documents . Our review unit shipped with the 240Hz WQXGA model (running at 2,560 by 1,600 pixels) which, in my book, is the ideal balance between sharpness and silky smooth refresh. There’s no HDR support, but at least it offers a relatively high brightness of 500 nits, as well as full coverage of the DCI-P3 gamut. And while the screen is a big reason the Triton is a hefty 5.3 pounds, that’s still better than most 17-inch gaming notebooks (the Razer Blade 17 clocks in at 5.5 pounds).

Powering that glorious display is Intel’s 12th-gen processors and NVIDIA’s latest RTX 30-series GPUs, all the way up to the droolworthy RTX 3080 Ti. The unit we received featured that GPU as well as Intel’s top-end Core i9 12900H, 32GB of LPDDR5 RAM and a speedy 1TB NVMe SSD. To be honest, it was that configuration that inspired me to review the Triton 500 SE in the first place. I wondered, can this unassuming notebook actually satisfy gamers? Turns out, yes. 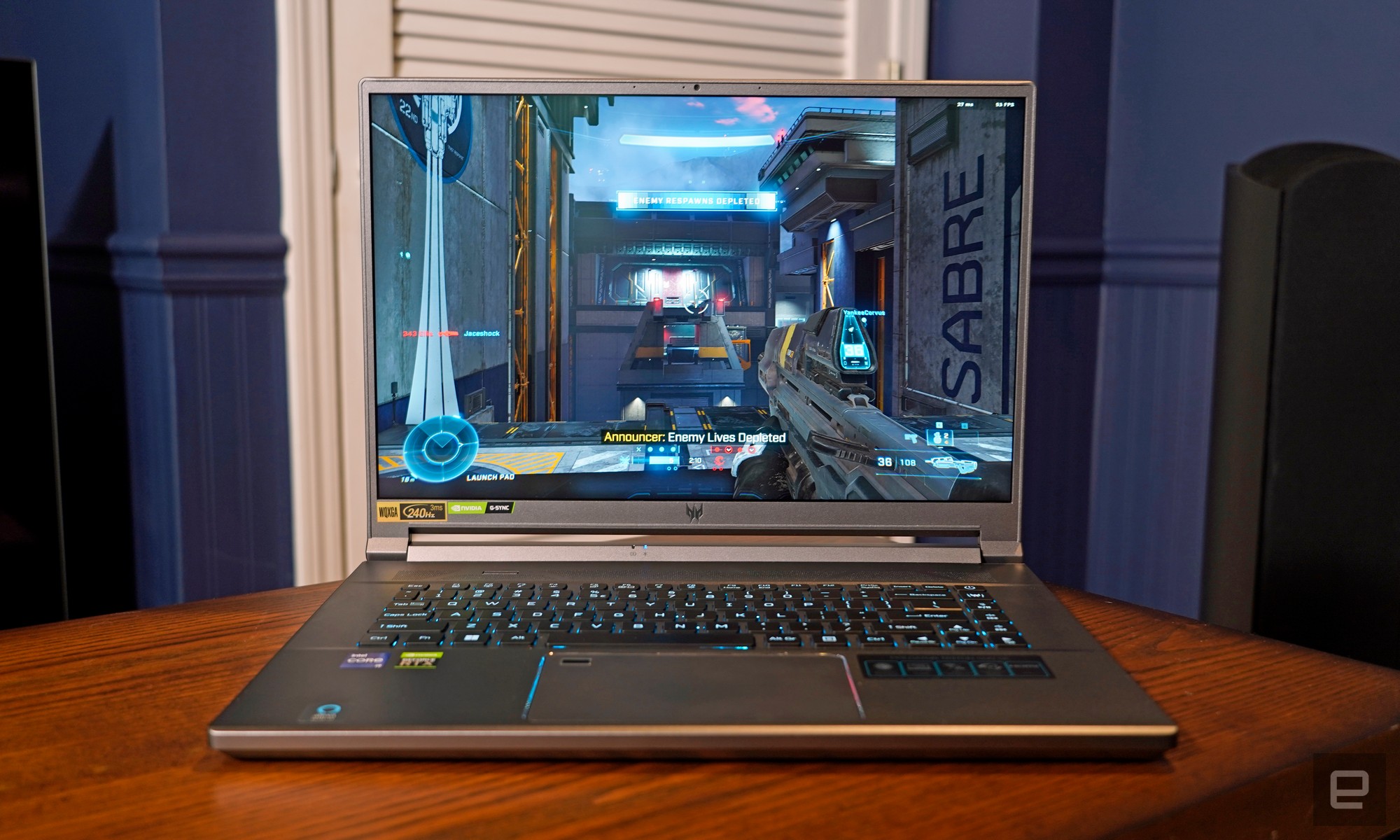 Halo Infinitefor example, reached a solid 85fps at the Triton’s native resolution at ultra graphics settings. While I missed the HDR and expansive view I’ve grown used to on the Alienware QD-OLED ultrawide monitor, I was surprised at just how immersive the game felt on a 16-inch display. You can thank the taller 16:10 aspect ratio for that – it sometimes felt like I was about to dive headfirst into Halo Infinite’s maps. (That could also be a sign that I need to make my desk a bit more ergonomic for laptops.) The 240Hz display also shined as I lowered the game’s graphics settings to reach higher framerates. I’m still not fully sold on such a high refresh rate, but it’s nice to see laptop makers pushing for smoother and more realistic gameplay.

Gearheads will likely appreciate the Triton 500 SE’s built-in overclocking capabilities. Acer’s software makes it easy to tweak clock speeds and thermal profiles. Personally, though, I was just glad to have a simple “Turbo” button on the keyboard. It revs up the fans all the way and automatically overclocks the system. In Halo Infinite and all of the benchmarks I ran, it typically led to 8 to 10 percent increase in performance. The big downside? It’s so loud you probably wouldn’t want to use it without headphones.

Even without overclocking, the Triton 500 SE annihilated all of the benchmarks we threw at it, delivering performance mostly on-par with the Razer Blade 15. There were a few instances where the Razer edged ahead, like in PCMark 10 and Geekbench 5’s Compute test (which mostly stresses the GPU). But in others, including Cinebench R23 and 3DMark’s Port Royal ray tracing benchmark, the Triton held a commanding lead. Partially, that’s due to our review unit having a slightly faster 12th-gen processor. Hit that Turbo switch and the Triton’s numbers soar even higher.

NVIDIA’s Advanced Optimus feature, which intelligently swaps the Triton’s GPU between integrated and discrete graphics, also worked flawlessly throughout my testing. I didn’t see any of the performance bottlenecking that occurred with older Optimus machines, where discrete GPUs had to be squeezed through integrated graphics. There’s also a MUX switch that lets you manually change between both GPUs without rebooting the entire system.

After benchmarking and playing several games for a few hours, the Triton 500 SE remained relatively cool. The CPU typically hovered around 78 Celsius under load, while the GPU hit 83 Celsius. It never felt hot to the touch, though it’s worth noting that I was testing in my chill basement. Fan noise was about what I’d expect with the Triton’s default performance settings – audible, but not nearly as irritating as cranking them up all the way with the Turbo button.

But even though Acer got cooling and overall performance right, it’s a shame that some of the Triton 500 SE’s hardware holds it back. The keyboard is fine for gaming, but I’d like more feedback for lengthy typing sessions. And while I appreciated the large and smooth trackpad, the actual clicking mechanism felt stiff – it was particularly bad at registering right clicks. I’m also not a fan of having a fingerprint sensor right on the trackpad, as it often gets in the way while I’m swiping around. Just stick that sensor on the power button, or throw in a Windows Hello webcam already! I’d also like to see Acer bundle more than just a pair of tinny stereo speakers, especially since Razer, Dell and others are cramming many more drivers into their notebooks.

Battery life is another disappointment, though I suppose we’ve grown used to that in powerful gaming laptops. The Triton 500 SE lasted five hours and twenty-five minutes in our benchmark, which involves looping an HD video. That’s 17 minutes less than the Razer Blade 15. During my typical workday, it usually lasted around five hours before needing a recharge. Unfortunately, that’s typical for gaming laptops with large screens. You’ll never want to be too far from a power plug.

Still, I’d imagine most people would want to keep their workstations plugged in for the best performance. Acer also included all of the ports you’d need to make it a true workstation, including two USB 3.2 Type A connections, dual USB- C Thunderbolt 4 ports, HDMI, Ethernet and an SD card slot. And thankfully Acer didn’t get rid of the headphone jack, something more laptop makers are doing these days.

The Acer Predator Triton 500 SE starts at $2,300, which is $200 less than the Razer Blade 15 with 12th-gen Intel chips and $400 less than the most recent Blade 17. Be prepared to shell out $3,000 if you want all of the hardware from our review unit (still cheaper than comparable machines from Razer and others). But if you can live with last year’s 11th-gen Intel chips, you can also find older Triton 500 SE models for $2,000 and under. We’d recommend doing whatever it takes to get a 12th-gen chip, though, as the performance difference is huge.

If anything, the Triton 500 SE proves that Acer is doing more than just chasing gaming gimmicks. After being known for producing cheap and unsophisticated laptops for years, it’s nice to see that Acer can make a refined gaming notebook without any unnecessary bling.